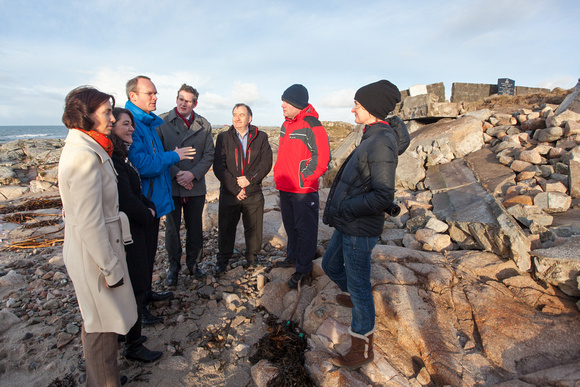 On Friday, Minister for Agriculture, Food and the Marine, Simon Coveney visited Connemara on the invitation of Galway West TD Seán Kyne to view the damage which the recent adverse weather and storms has caused. The Minister visited the prom and walkways in An Spideal, Mhaírois graveyard in Baile na hAbhann, the causeway at Leitir Mór, the pier and breakwater at Trá Bháin and the pier and a number of roadways in Roundstone. In Roundstone, the Minister also met with fishermen, farmers and locals regarding the recent damage. Local councillors, Seosamh Ó Laoi and Eileen Mannion and local Oireachtas members, Deputy Seán Kyne and Senator Hildegarde Naughton accompanied the Minister.

Commented Deputy Kyne: "I'm pleased that Minister Coveney has been able to visit the Connemara region to view for himself the damage and destruction caused by the series of storms that have hit the West in particular over recent weeks. While I have contacted all of the relevant Ministers and Ministers of State on a number of occasions now, with photographs and representations from local people, to relay the extent of the damage, visiting the area brings home the scale of the challenge that faces us in repairing and restoring the infrastructure.

"Regrettably, the Minister's schedule precluded visits to all areas affected but I'm confident the areas visited today have assisted the Minister in preparing for Tuesday's Cabinet Meeting which will focus on the storm damage with presentations from both Environment Minister, Phil Hogan and OPW Minister, Brian Hayes," concluded Deputy Kyne.
Seán Kyne TD