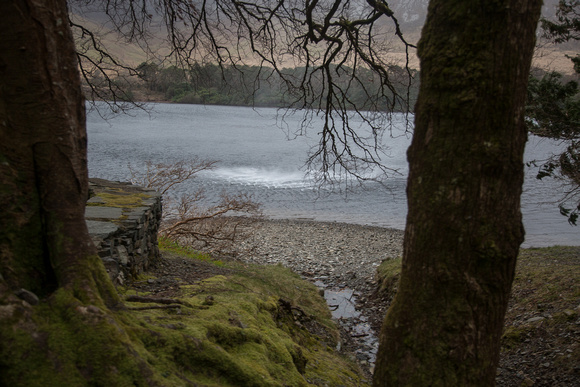 The vortex comes to shore, fades and dies

Visitors to the Gothic spleandour of Kylemore Abbey in north Connemara sometimes get a natural phenomenon thrown in for free. During high winds the lake facing the monastery, Pollacappul, throws up ‘twisters’, funnel-shaped maelstroms of churning water shooting plumes of white spray high into the air, almost veiling the view of the local Bens. “We’re quite used to them at this stage,” says Eithne O’Halloran, Marketing Assistant of Kylemore Abbey and Garden Ltd. “In fact you can have several spinning across the lake at any one time.” The event is caused by winds funneling through the mountain gap between Doughruagh on the north side and Benbaun to the south. This would push the twister on a westward journey although this can be reversed depending on wind direction, says Eithne. Folklore handed down from the centuries has a different ‘twist’. Every seven years during a storm, a white horse emerges from the lake. The lake name itself backs up this story, Pollacappul means the horse’s hollow (lake hollow). In 2011 members of Kylemore Abbey’s staff claimed they saw a white horse at the lake during a storm. “Twisters are quite common on a lot of Connemara’s lakes and experts have stated that the white horse would be a representation one of the deities in ancient times,” says Eithne. Another reason not to be discouraged by stormy weather if you visit Kylemore Abbey .
© Seán Ó Mainnín
User Agreement
Cancel
Continue